The All India War Memorial, often known as India Gate, is located on New Delhi's Rajpath. The immense captivating structure of the India Gate is a magnificent attraction that is frequently likened to France's Arc de Triomphe. In Rome, it is known as the Arch of Constantine, while in Mumbai, it is known as the Gateway of India.

The 42-meter-high historic structure was constructed by the famous Sir Edwin Lutyens and is one of India's most significant war memorials. India Gate is also renowned for hosting the Republic Day Parade every year. While India gate is stunning during the daytime, its beauty is magnified during the evening hours following sunset. India gates are awash with visitors even at night. It is possible to take a peaceful walk along the Rajpath that overlooks India Gate.

Qutub Minar is an old minaret or victory tower in Delhi's Mehrauli district that is a UNESCO World Heritage Site. At 72.5 meters (238 ft), Qutub Minar is Delhi's second-highest landmark. After conquering the previous Hindu monarch of Delhi, Qutb-Ud-Din-Aibak, the founder of the Delhi Sultanate, began building in 1192.He created the groundwork before entrusting the structure to his son-in-law and successor, Iltutmish, who added three more levels. Firoz Shah Tuglak inspired the construction of the fourth and fifth stories. Firoz Shah Tuglak's Qutub Festival, held in Qutub Minar in November-December, is a three-day festival that honors the monument's splendor and reveals its rich history to the globe.

The Delhi Tourist and Transport Development Council and the Sahitya Kala Parishad are co-organizers. Cultural acts and artistic forms lure tourists from all around the world to the event. It's a fantastic group of traditional and folk musicians.
The Qutub Minar is receiving the worldwide and national recognition it deserves. It is a three-day feast of dancing and music that aims to rejuvenate and revitalize the monument. Food vendors serving delicious regional delicacies contribute to the festival's bustling atmosphere.

A symbol of Indian spirituality and culture along with architecture. Akshardham Temple is a well-known Hindu temple and a religious-cultural complex. Also called Swaminarayan Akshardham, it's believed to be dedicated to Lord Swaminarayan. Akshardham is now listed in the Guinness Book of World Records as the world's largest comprehensive Hindu Temple.

It is famous for its beautiful architectural design. It boasts eight magnificently hand-carved mandapams. Timeless Hindu beliefs and extravagant rituals of devotion are featured within the temple's walls. The centerpiece, i.e., Lord Swaminarayan's Murti, and the other 20,000 gods, influential individuals from Indian, the past, and sages, display an essence of Indian tradition, architecture, and timeless spiritual beliefs. Akshardham complex is the home of India's most significant step well, the captivating water spectacle, an open space Narayan Sarovar, and various other expeditions and rituals. The complex is more than a sanctuary for seekers of spirituality.

Humayun's Tomb, as the name implies, is said to be the ultimate resting place of Humayun, the Mughal Emperor Humayun. The mausoleum is located in Delhi's Nizamuddin East neighborhood. It is the Indian subcontinent's first garden tomb. Humayun's royal wife, Empress Bega Begum, commissioned the construction of this exquisite architectural masterpiece in 1569-70.

It was one of the few buildings of the period that used massive amounts of red sandstone. The arrangement of Humayun's mausoleum is typical Mughal in style with Persian elements, and it was built by the Persian architectural prodigy Mirak Mirza Ghiyath. Humayun's Tomb was included on the UNESCO World Heritage List in 1993 due to its outstanding architectural and historical significance. The architectural splendor of Humayun's Tomb is hard to overlook. The majestic mausoleum is located in the heart of a wide, sophisticated, decorative Mughal Garden, and its splendor is only accentuated throughout the winter. It is situated on the banks of the Yamuna River. This Tomb also houses the remains of many other Mughals, including his wives, sons, and grandsons of the late Shah Jahan, the Emperor Shah Jahan, and all subsequent Mughals.

The Museum of Illusions at New Delhi's Connaught Place is the country's first optical illusion museum. It's a terrific place to put your senses to the test with exhibits like holograms, a revolving cylinder, unanchored rooms, rooms with Mirrors that modify reality, and many more.

The museum has multiple holograms that display pictures that form 3D illusions and frequently alter or disappear. It's also possible to see photo illusions with different backgrounds or the stereogram as a picture. It has an unexplained item that appears in 3D when seen from a specific angle. It also contains a Smart Playroom, which promotes cognitive abilities. Puzzles, maths games, building blocks, complicated knots, and so on may all be used to teach.

India is a nation full of art lovers, and the National Gallery of Modern Arts (NGMA) is nothing less than heaven for those who love art. As part of its mission to provide an exceptional art experience to guests, the National Gallery of Modern Art, Delhi, preserves artworks and other artifacts dating to the 1850s. NGMA, located in Delhi, is the principal museum housed in Jaipur. It was founded on the 29th of March 1954 by the Indian Government. With 12,000 square meters, it is the largest in comparison to its later branches in Mumbai and Bangalore.

The Gallery helps visitors connect works of contemporary art to the desires for the spirit of humanity. The Gallery is home to an extensive collection of over 14,000 pieces of artwork, which includes parts that date back as far as one century and fifty. While you are in the museum of modern art, it is possible to experience the genius that was the work of Thomas Daniell, Rabindranath Tagore, Raja Ravi Verma, Gaganendranath Tagore, Nandalal Bose, and many more international artists and sculptors. It is a beautiful blend of contemporary and modern art through art galleries and various exhibitions. Therefore, make sure you go to It and let your artist in you enjoy the world of creativity.

In the capital city of India, located in New Delhi, the Lotus Temple is a temple that is dedicated to the Bahai religion. The impressive structure of the building is arranged as the most stunning lotus with white petals and is among the most frequented places worldwide. The design of this temple was conceived by Canadian designer Fariborz Sahba and was completed in 1986. This temple is designed to spread the unity that is God the Almighty and is accessible to all, regardless of nationality or religion, race, or gender.

This Lotus temple is among the seven Bahai Houses of Worship that are located all over the globe. When you step into the Lotus temple complex, you are greeted with the most beautiful entrance gate, gorgeous flowers, and stunning pools. The path to the temple's entrance is filled with lush green plants, and a serene feeling is evident despite the raucous crowd. When you enter, the stunning architectural design will induce an ethereal silence. It is possible to read and sing the sacred texts of all faiths, and the musical interpretations of religious texts are sung with any limitations within this temple's complex. There is a Bahai Lotus Temple. Bahai Lotus Temple is undoubtedly one of the most visited locations in the capital city. It is not just for its fantastic architecture but also to experience a completely new method of meditation in a completely serene, awe-inspiring setting.

The Red Fort is a historical fortress in ancient Delhi. In reaction to the economic shift from Agra to Delhi, Shah Jahan built it in 1639. The principal home of the Mughal Emperors, this majestic building gets its name from its impenetrable red sandstone walls. Apart from housing the emperors and their families, it functioned as the Mughal state's political and ceremonial center and the site of key events affecting the area. This monument is home to several museums that house significant artifacts.

Every year, on Independence Day, the Indian Prime Minister hoists the national flag here. Previously called Qila-e-Mubarak, or "the Blessed Fort," The Red Fort is situated on the banks of the Yamuna River, which fed the moats surrounding the fort. It was a part of the city of Shahjahanabad, which is now known as Old Delhi. The complete fortification complex is thought to exhibit Mughal architecture's creative genius and ingenuity. The Red Fort, with its rich history and culture, is one of the most visited landmarks in India and a popular tourist destination in Delhi.

It is also known as Agar Sain Ki Baoli or Agrasen ki Baoli. This is a historical monument located on Halley Road in New Delhi. A mosaic composed of various rocks and stones, Agrasen Ki Baoli, is an ancient reservoir of water that rises from deep within the earth and is situated on top of three stone steps. It is hidden among the towers of business and residential buildings in central Delhi.
This is an oasis of peace and tranquility ideal for photographers. The brick walls that once surrounded the structure transport visitors back in time. As you climb the stairs, an unexpected decrease in temperature can be felt. Agrasen Ki Baoli is a protected site in the Ancient Monuments and Archaeological Sites and Remains Act 1958 of the Archaeological Survey of India. The construction that is Agrasen Ki Baoli is spread over an area of 15 meters and measures 60 meters in length, which is impressive given that it's thought to be constructed sometime around Mahabharata.

The reservoir continues to serve its original function because the lower portions of the baoli are sometimes submerged in water.
The mosque is located on the South-Western side of the reservoir. It sits on four pillars with a massive stone roof. Interestingly, this place is famous for its haunted history of ghosts, and people have reported feeling the presence of a spirit here often. Recently, this location is becoming popular with locals following Raju Hirani's film "PK," which starred Aamir Khan, was shot in the area.

The park is located in the secluded Said-ul-Ajaib, far from the bustle of the city. The Garden of Five Senses is spread over 20 acres and is designed to engage all your senses: touch, smell, sight, and taste. It's an oasis for lovers of nature. It is situated on rocky terrain and a portion of the plains.

The garden is home to a variety of themed parks, including a part of Mughal baghs with lakes of water lilies, waterfalls of sparkling water, a solar energy park, an amphitheater, an enormous yet beautiful food court, as well as numerous artifacts and rock sculptures, and themed decorations. It was designed by the well-known Delhi designer Pradeep Sachdeva. The Delhi Tourism and Transportation Development Corporation jointly built the park for an astounding 10.5 crores. It was officially opened in February 2003. The February flower show is a significant occasion. 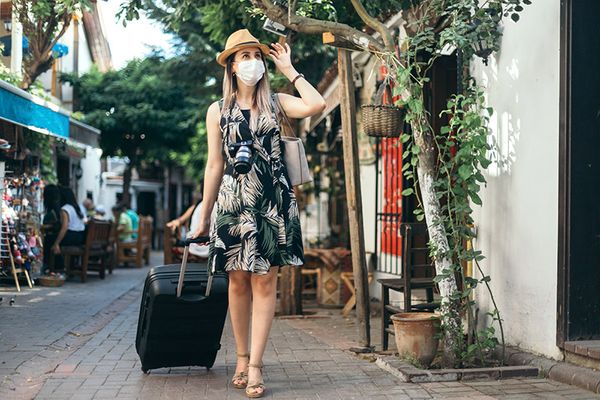 With 1.59 billion Covid vaccinations in India and continuously growing number of Indians getting vaccinated, travel has become a lot safer than it was last year. But Coronavirus pandemic